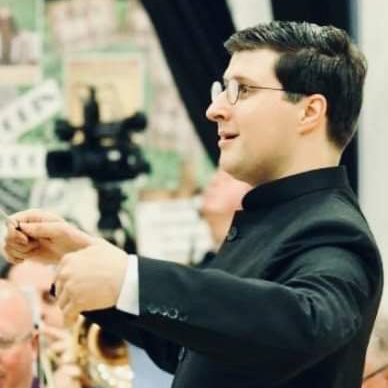 Chapeltown Silver Prize Band are delighted to announce the appointment of Colum O’Shea as their new Musical Director.

The band received multiple excellent applications for the position of MD. Every candidate brought different positive attributes to the role and we are very thankful for their interest in the position.

Having a wealth of brass band knowledge as well as experience in concert banding and musical theatre, Colum’s passion, drive, enthusiasm and technical knowledge were all key highlights of his audition with the band.

Colum’s playing and conducting experiences stretch across all levels of banding in both the Midlands and Yorkshire areas, where he has displayed his talents as a conductor and on a range of instruments. He has most recently played for Grimethorpe Colliery Band as well as a long and successful career conducting the Newark & Sherwood Concert Band.

Outside of the banding world, Colum is known for his work as a Funeral Director with A.W. Lymn in North Nottinghamshire. Another proven passion and success for Colum and his commitment to his work, having been involved with the family funeral service since the age of 15.

Talking about his appointment, Colum says:

“It’s a privilege to have been asked to take the band forward, I have been fortunate to work with the band on previous occasions and have always admired their attention to musical detail as well as a commitment to making the bandroom an enjoyable and welcoming place to be. I look forward to many enjoyable performances with the team at Chapeltown, I can’t wait to get started!”

The band is really looking forward to working with Colum and to a long and successful partnership.